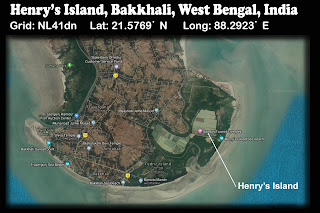 Everything about Henry Island Dxped II was bright. All spruced up and shining West Bengal Fisheries Resort by the sea beach was our location. The weather was crisp, the propagation was favorable and the enthusiastic participants were eleven charged up Dxers, a mix of new old and even a non dxer xyl coming from far and wide from Kolkata, Delhi to Agartala.

TRAVEL
We traveled in three cars: the two cars with most of the gear and eight Dxers started from Kolkata early morning after gathering at 6 am at my Jodhpur Park residence. Debanjan drove a Baleno with Subhendu Das, Sandipan Basu Mallick & his xyl Upamita. The good old Ambassador was driven by me with Babul Gupta, Pradip Chandra Kundu and Sudipta Ghose as passengers
with accessories like folding table for outdoor Dxing, tent, grounding 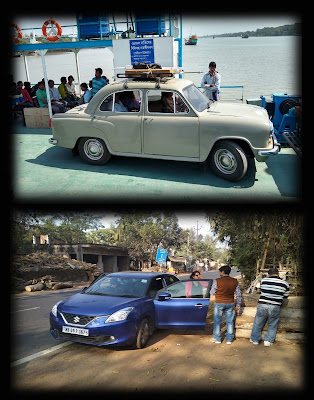 and reels of copper wire for long wire antenna. The other Maruti car followed later after Alokesh Gupta and C.K.Raman flew down from Delhi and joined the new participant Kallol Nath who was navigator while C.K.Raman drove the car from 9.30 am onward. The stretch of road from kolkata was excellent for most of the Gangasagar Mela which brings in lakhs and lakhs of devoties to the Sagar Island which was very close to where we were travelling. Travelling on the Saraswati Puja day, the streets were teeming with brightly clad boys and girls sporting their dresses in shades of yellow and we were a lucky to catch the ferry crossing bit before the crowd at around 10.30 am.
This was probably the last time we would be crossing the ferry at River Hatania Doania at Namkhana because the massive girder bridge is almost nearing its completion and we would soon be drive down direct to Bakkhali in three and a half hours.

ANTENNA
The first Dxers were at Bakkhali by 1 pm and after finishing the lunch at the West Bengal Government Tourist Lodge settled at Henry Island. This time the personnel at the Fisheries Resort quickly remembered us and were familiar with the "crazy bunch of radio listeners" who string wires all over the resort. The resort had expanded with more bamboo fencing which would serve as our antenna supports and besides there were plenty of bamboo of all

shapes and size lying around to help us to support the antenna which ever way we wanted. In two hours we had two beverages of 200 meters strung and a PA0RDT whip antenna put up. A room was promptly converted into a "shack". The second batch of three Dxers arrived a couple of hours later.
Part of the "development" of this resort was addition of LEDs over much of the area and one of our beverages traveled right past a brightly lit children park, in the process picking up much of the radio noise. In the coming days we put up two more beverages away from the light sources, one travelling north south and the other travelling east west. The surprise of this Dxped was the performance of the PA0RDT whip we performed consistently better then all of the beverages!!! A commercial Diamond dipole for two of the higher bands was also put up but with the propagation condition with zero sunspot number, there were only hardly any signals. 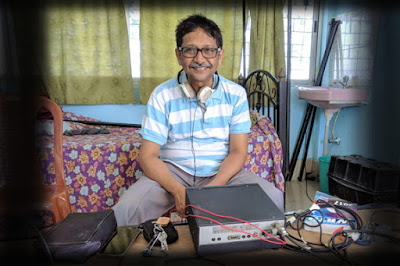 BAY PIRATES
The Bay of Bengal Pirates which we have logging since our Mandarmani I Dxped days were very much there, more in numbers, and better in modulation. They were still operating between 1000 kHz and 1400 kHz and the odd ones were bellow 1000 kHz. One particular station at 1235 kHz appeared to have more power and transmitted all night. A couple of them had harmonics around 2000 kHz. Now that we had three Perseus and one Airspy SDR, the entire broadcast band of the Pirates were recorded. We are still baffled about their exact location and the revenue model of the pirates because these transmissions appeared to carry very little commercials. 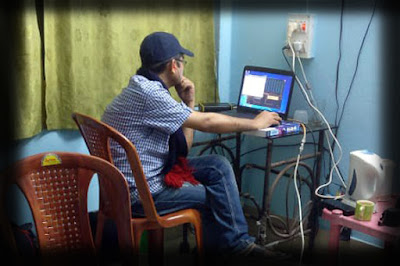 The change in program content was the appearance of the local Bengali "Disco" beat song with heavy bass. The radio theaters called "Yatra" in local parlance and the odd request program were there. A couple of stations broadcast their mobile telephone numbers too!!! 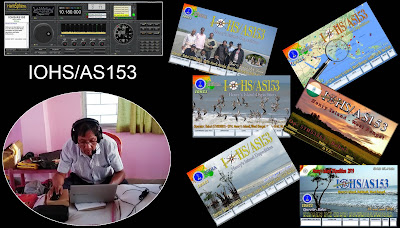 HAMSPHERE
Babul Gupta, who is really hooked on to Hamsphere set up his station with the call sign: IOHS/AS153 and soon made a number of contacts all over the world in his "virtual" amateur radio. Hamsphere apparently recognizes Henry's Island as an island even though by actual geography it is a piece of land separated from the mainland by a creek with a short connecting road bridge. Nevertheless, there was considerable interest in the Hamsphere community over logging. 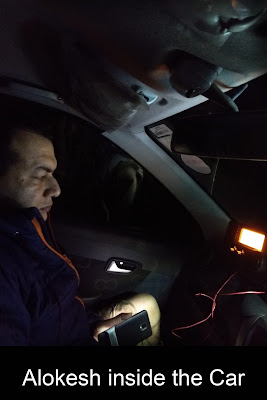 This allowed me an opportunity to try out listening from a beverage far away from any light source. I strung a 250 mts long wire away from the leds and set up my ICOM R75 with battery at one end. The result in the first hour of listening were brilliant with a number of long wave stations coming in. The best was Polskei Radio at 255 kHz at around 1800 hrs UTC but Algeria was also loud and clear. However, during the second session of Dxing at around 2100 hrs UTC the propagation was so poor that barely need to put up the tent because the car was a convenient "shack" and the poles of the fisheries ground were the supports.

THE DX CATCHES AND SURPRISES - LOW FREQ AND MEDIUM WAVES
Philippines DZME 1530 kHz audible through 1300 to 2200 hrs UTC was the surprise because all of our earlier Philippines MW logging were in the short one hour window after they signed on at 2100 hrs UTC. Other Philippines logged around 2100 hrs was 666 kHz DZRH and 594 kHz DZBB. On 12th Feb 2019 PNG NBC Bongenville 3325 kHz coming in with clear audio and little QRM was probably the star of the Dxped and the other PNG NBC was logged on 3260 kHz with poor signals. Later on the same channel we could hear RRI Plangkarya. The sole Latin was Radio Club de Para 4885 kHz Brazil 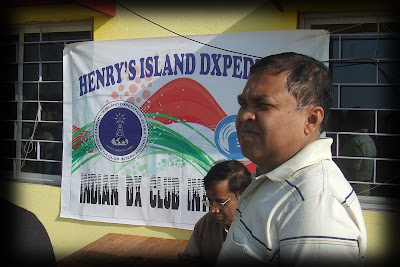 which peaked to 333 signal level at 0130 hrs UTC. Solomon Island 5020 kHz with poor signals was noted signing off at 1300 hrs UTC. Japanese MW, which were the star of the first IDXCI Dxpeds at Chandipore in the mid eighties, again reappeared and quite a few of them were logged. The best was American Forces Radio at Okinawa on 648 kHz which was tricky to receive considering the all powerful AIR Kolkata 657 kHz splashing signals from adjacent channel. Other Japanese MW were 549 kHz JOAP and 1413 kHz JOIF. Indonesia Peninsula of Laos, Vietnam and loud and for the first time we could log Luang Prabahang 705 kHz and Khantabouly 585 kHz at around 2300 hrs UTC. Vietnam 675 kHz and 610 kHz with chant or excercise like music during sign on at 2145 hrs UTC. Cambodia Pnom Penh was clear 918 kHz around this time. Around 1500 hrs UTC we could log many of the Nepal MW from Kathmandu 792 kHz, Dhankuta 648 kHz and Pokhra 684 kHz. On the tropical bands, North Koreans stations were all there from Eco of Hope to the other. 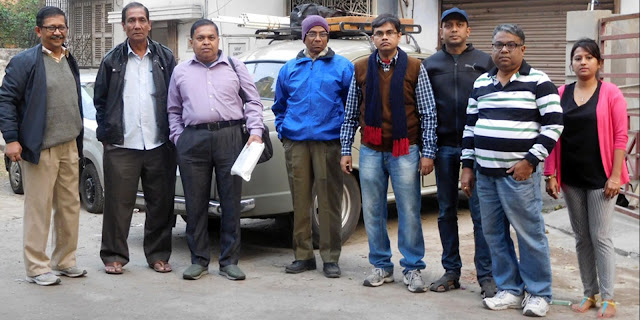 THE SW CATCHES
With dwindling transmission in the SW the bands, some of the common stations of yesteryears are now becoming 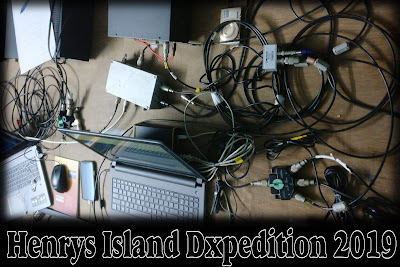 rarities. Guiniea Conakry in French at 2110 hrs UTC on 9650 kHz logged by Pradip Kundu with his XHDATA and whip only was indeed a surprise. Other SW such as 9930 kHz WHR Korar Palau with religious program in English at 1530 hrs UTC, TWR Swaziland at 1530 hrs UTC on 9585 kHz, VOA Mopang Hill on 15580 kHz at 1545 hrs UTC, BBS Thimphu at 6035 kHz at 1530 hrs UTC kept the SW hopes alive. It was a pleasant surprise to hear V.O.Greece on 9420 kHz at 2100 hrs UTC both with strong signals.
FOR THE LAY PRESS
Sandipan had enthusiastically lined up a bit of coverage in lay press about our meet which coincided with the World Radio Day 13th February 2019. Write ups for the newspapers were finalized, photo shoot before the club banner was completed, audio clipping to be 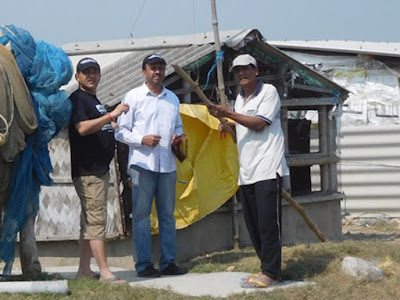 mailed to Agartala, Tripura were done in rigged up studio and phone interview with journalists done. The efforts were successful. Two vernacular dailies in Kolkata covered our Dxped. Why are they important for Dxing? Pradip Kundu radio interview to be aired over AIR Agartala FM for World Radio Day and his write up appeared in the most circulated Tripura daily. These articales generate qquite a bit of public interest and many of our now active members were drawn by the artical on Dxing centered around the Chindipore  Dxped which appeared in a popular children's magazine in early 90. 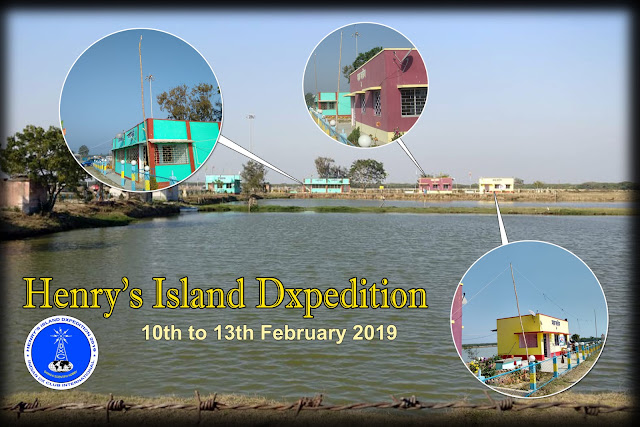 SOMETHING FOR EVERYONE
This Dxped had something for everyone. From the newcomer Kallol trying out different exotic loggings with his XEDATA to the expart C.K.Raman convarsant with all of the lower band frequencies to Babul Gupta with his 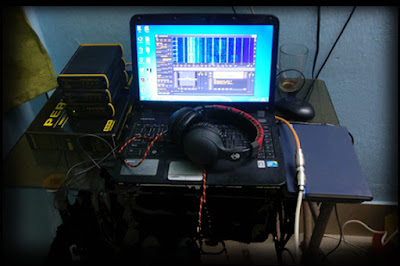 Hamsphere and Pradip Kundu in his more unassuming DX style of quiet listening sitting cross legged on bed with a portable and whip. For Subhendu Das, a professional commercial radio man it was different experience to see the amateurs and their interests at close hand. The Persueus brigade with C.K.Raman, Sudipta Ghosh and Dibanjan had their own approach to "waterfall" screen Dxing and Alokesh with his Airspy matched them. The PARDT whip brought by Alokesh turned out to be the hardware star. The non Dxers Upamita efficiently handled the exotic fooding of the Dxped. Sandipan who got interest in reading about IDXCI Dxped in the interest was organizing one himself this time and felt good that xyl Upamita was convinced that there were several other motivated Dxers around. Kallol a new comer to the hobby wanted some more SW experience and also would have like more session time in discussing the DX techniques.
One whole day our last Dxped in 2016 was washed off by local QRN. This time we had so many angle to our hobby from hardware to software that DX obstacles had no chance. 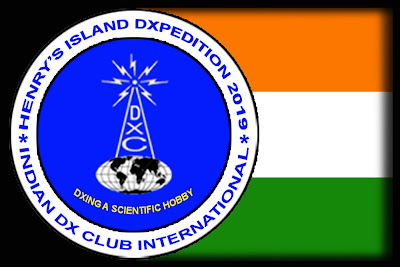