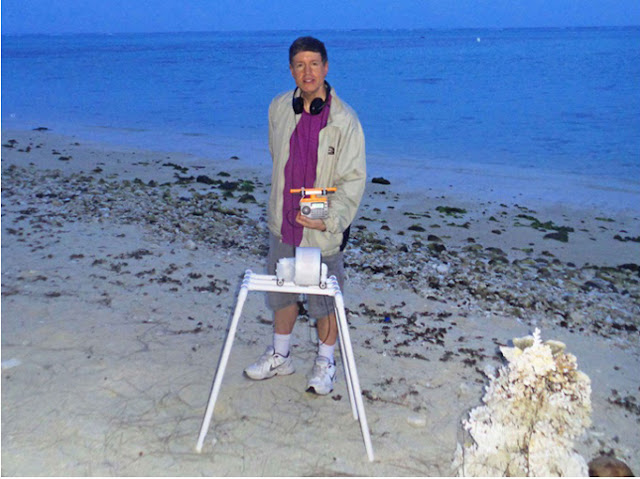 Introduction   Two years ago a wacky new idea started to be brought into reality—the design of lightweight, airport-friendly FSL antennas that could provide serious gain boosts (and serious hobby excitement) for DXers on exotic vacations. The FSL antennas had already proven that they were the ultimate compact performers, but could they also somehow provide a major breakthrough in travel DXing results? If all of a DXer’s gear needed to fit inside hand-carry luggage and pass through multiple security inspections, exactly how much performance could a DXer expect on an exotic ocean beach far away from home?


After a couple of “warm up” trips to Kona, Hawaii, I was eager to give my “frequent flyer” DXing gear a “final exam” to answer this question—a 5 day visit to Aitutaki Island in the Cook group, about 2600 miles due south of Hawaii. This South Pacific location featured dazzling scenery, subtropical weather, good security and very friendly island residents. It had no MW transmitters anywhere within 164 miles (264 km)-- the closest one was 630-Radio Cook Islands in Rarotonga.  It certainly seemed like the ideal “exotic ocean beach” venue to test out the lightweight gear, but little did I know that I was about to enjoy the most thrilling hobby experience I’ve ever had!


Somehow I managed to stumble across a superb sunrise propagation path for South and Southeast Asian reception, resulting in loggings of 657-, 693-Bangladesh, 918-Cambodia and 1431-Mongolia—all at over 6,800 miles (10,950 km). As if that wasn’t enough, the same propagation path ignored Japan almost completely. Usually around sunset I was doing my best to convince my wife that the main reason for this trip was to celebrate our anniversary (despite the somewhat different reality), so most of the sunset time was devoted to beach walks, Polynesian dinners and the like. That didn’t stop long range stations like 1000-Radio Record in Sao Paulo, Brazil (7,072 miles/ 11,380 km) from showing

showing up a couple of hours later, though, along with multiple North American stations. The ocean-boosted propagation seemed to be phenomenal from sunset to sunrise, to the point where almost any low-powered station was capable of pounding in at S9. The entire experience was an unforgettable hobby thrill for a North American DXer using very basic equipment—and it obviously proved that this new niche of travel DXing has a lot of excitement to offer! 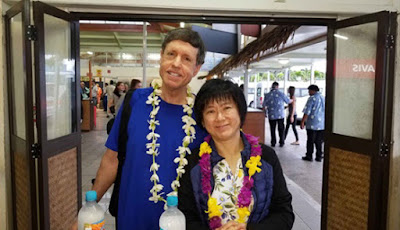 TRAVEL TO THE COOK ISLANDS   Although Aitutaki and Rarotonga islands are in a fairly remote part of the Southern Hemisphere, they are actually in the same time zone as Hawaii, so any jet lag from the west coast is minimal. Air flies weekly from to in a 9 1/2 hour overnight trip, and the service and food on our flight was excellent. The Cook Islands have a subtropical climate with seasons opposite from those in the Northern Hemisphere, so visitors should expect quite a bit more heat and humidity than at home. The islands are administered by in a “free association” agreement, and as such the Maori-speaking islanders are very friendly and welcoming to visitors. is the largest island, and upon arrival at the airport visitors will pass through immigration and customs, receive complimentary flower leis and bottled water, and if they are staying on the island (as most do), proceed to their motels. 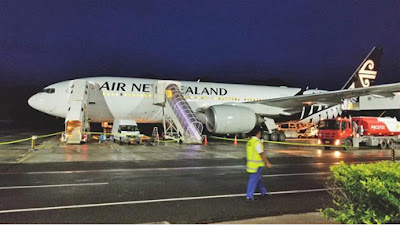 Our chosen destination of Aitutaki island is located 164 miles (264 km) north of Rarotonga, so we needed to board an additional Air Rarotonga flight of about 1 1/2 hours to the gorgeous island. Aitutaki is famous for a dazzling turquoise lagoon filled with a variety of beautiful tropical fish, and features many motels with convenient access to the lagoon. Because of its unique beauty it has the nickname of “” among the many Kiwi tourists. Most of the motels are on the northwest side of the island right on the lagoon beach, with a straight salt water path to Asia, the Pacific islands, New Zealand and Australia. DX reception from North and South America is also quite good at these beaches, although the best sites would probably be on the north and eastern sides of the island. During my stay the security on isolated lagoon beaches seemed to be excellent, probably due to the fact that most of the motels own these areas as part of their property, and try to reserve them for tourists. The subtropical climate is ideal for growing coconuts, bananas, guavas and the like, and fresh fruit is always in abundance. Of course as a tourist you can expect to pay a premium for restaurant meals, lagoon cruises and the like, but hobbyists who are primarily motivated to chase rare DX from sunset to sunrise will have no problem minimizing expenses. One of the quirks about visiting the is that Air New Zealand requires visitors to have a confirmed motel reservation before they can purchase a ticket—apparently because of some tourists who thought that setting up tents on the beach would provide the ultimate travel bargain. 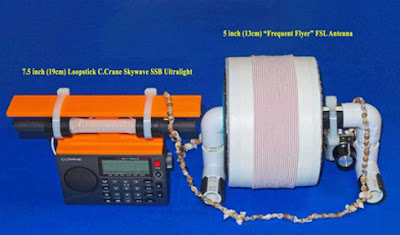 “FREQUENT FLYER” LIGHTWEIGHT DXING GEAR   Both the 7.5 inch loopstick C.Crane Skywave SSB portable and the 5 inch (13 cm) TSA-friendly FSL antenna carried along for this trip had been used in previous transoceanic DXpeditions, and both are designed to fit easily within hand-carry luggage. Because of exceptional ocean-boosted propagation the modified portable was used alone for the North and South American reception, along with those for the Pacific islands, , and . The 5” FSL antenna was used only to boost the Asian signals during the sunrise sessions, although even then the modified portable typically could receive many of the Asians all by itself. For this trip a 4 foot (1.3m) breakdown PVC base was also carried along to elevate the FSL antenna right next to the salt water edge, and this did seem to boost its performance somewhat. In comparison to John Bryant’s 500 foot Beverage antennas at Easter Island during his 2007 trip this was a very humble setup indeed, although the long range performance of these lightweight DX chasers was about to be demonstrated in pretty convincing fashion.


Checking out transoceanic DX propagation at an exotic ocean beach site can provide the hobby thrill of a lifetime-- if a DXer is lucky enough to choose the ideal time, place and gear to make the chase. All of these fell into place in an amazing way during the 5 day trip to Aitutaki Island with Ultralight radio gear, resulting in the reception of MW stations in India, Bangladesh, Mongolia and Cambodia. 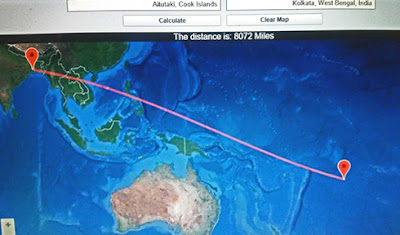 PACIFIC ISLAND LOGGINGS
Chasing DX from the center of Polynesia was an ideal chance to track down exotic DU island stations that rarely, if ever, show up on the west coast of North America. From my location on the Aitutaki lagoon beach obscure stations like 630-Cook Islands and 990-Fiji Gold were pounding in at S9 levels every evening, while other exotic island stations were the strongest ones on the MW band. Phenomenal ocean beach propagation was routine-- except that the North American pest stations (that TP-DXers love to hate) never managed even a whimper.


Close-in DU propagation was so favorable that only the 7.5 inch loopstick CC Skywave SSB Ultralight was necessary to track down most of these exotic stations at S9 levels, and make all the MP3 recordings linked below. The vacation was also an ideal chance to investigate and record what is possibly the most obscure MW-DX station still transmitting in the Pacific-- 630-Radio Cook Islands, with an underperforming 2.5 kW transmitter in Rarotonga. Overall the entire experience was a real thrill for a west coast DXer who rarely hears these stations, let alone at such powerful levels. 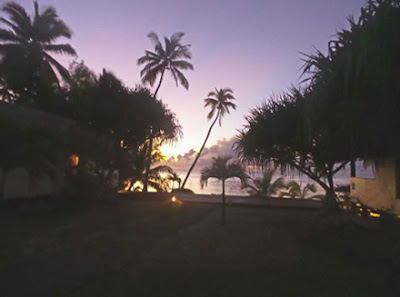 NORTH AMERICAN and SOUTH AMERICAN LOGGINGS
The closest point on the USA mainland is 4,550 miles (7,323 km) away from Aitutaki island, and there was a straight ocean path to North America from my DXing spot on the lagoon beach, resulting in several strong transoceanic signals across the Pacific. The closest point in South America (Chile) was about 5,550 miles (8,930 km) away, although there was a 480’ (150m hill) between my lagoon spot and that direction.
Because of various tourist activities scheduled by my wife around sunset and a lingering mindset that North American signals weren't exactly top priority DX to chase, no deliberate effort was made to go after these stations while in the Cook Islands. Despite this 7 USA mainland stations and one South American (1000-Radio Record in Sao Paulo, Brazil) crashed the Kiwi sunset skip DXing sessions about 2 hours after sunset, wiping out the adjacent 9 kHz-split frequencies that I was trying to receive. The most distant of the USA stations was 1170-KFAQ in Tulsa, Oklahoma, at 5,642 miles (9,080 km). All were received on the 7.5" loopstick CC Skywave Ultralight alone, which provided good reception of these stations because the reciprocal bearing of New Zealand was ideally directed at North America on the 7.5" loopstick-- so that the DX from both directions was received at optimal strength concurrently. 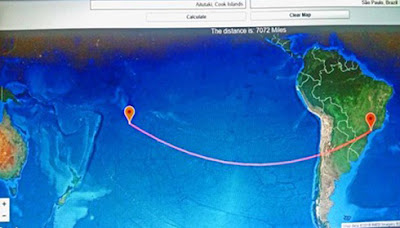 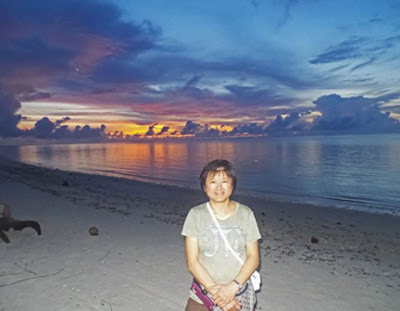